What is GST – Goods and Services Tax

The Goods and Services Tax Act of 2017 was passed by the Indian Parliament, resulting in the establishment of the Goods and Services Tax (GST) in India. It is a consumption-based or indirect added tax on the supply of goods and services. It is imposed at each stage of the manufacturing process, but it is returned to all parties involved. The final tax burden is paid by the consumer. GST replaced several taxes previously applied by the federal and state governments, along with the central excise duty, service tax, extra customs duty, surcharges, state-level value-added tax, and octroi.

In India, the GST law is a multi-stage, destination-based tax applied on all added benefits. The GST council controls tax rates, rules, and regulations in the spirit of “one nation, one tax.” The council is made up of the finance ministers of the federal and state governments. This means that, through the Central GST and State GST, both the Union and the States are now in charge of taxing. The central government applies the Central GST (CGST) while the state government applies the State GST (SGST) on transactions that take place within a single state.

The Central Government imposes Integrated GST (IGST) on interstate transactions and imported goods and services. However, this complicates the tax collecting process for state governments because they are no longer able to collect taxes owed to the federal government. To see if CGST, SGST, or IGST are relevant, first verify whether the transaction is:

The separation was made in consideration of the country’s federal structure, which gives the Constitution rights to both the Centre and the States to charge and collect taxes. Both have separate duties to fulfil, and they both require tax income to do so. A tax system like this allows taxpayers to take a credit against one other.

In India, GST has removed several indirect taxes. On March 29, 2017, Parliament passed the Goods and Services Tax Act. The Act went into effect on July 1, 2017.

The GST tax is divided into four categories, as follows:

The CGST stands for the Central Goods and Services Tax. It depends on providers operating within the state. The expenses collected will be shared with the expert body in authority. This means that both the federal and state governments will decide to combine their levies to a similar limit to share revenue. The costs are imposed on all intra-state supplies of items or potential advantages, as specified in Section 8 of the GST Act, however, the rate of the expense will not reach 14% each.

IGST (Integrated Goods and Services Tax), one of four types of GST (CGST, IGST, and SGST), is based on the concept of “one tax, one nation.” The Integrated Goods and Services Tax Act of 2016 controls IGST. When products and services are moved from one state to another, the IGST is imposed. IGST is collected on items that are transported from Tamil Nadu to Kerala. The state government and local governments split the IGST revenue according to the rates approved by experts.

Why is GST needed in India?

GST is a tax that is generated based on a change in the taxation system. Various Central and State taxes have been combined into a single tax known as GST, which could lead to a single national market.

The VAT rate depends on the state, while the GST makes it universal and consistent across the board. The tax would be split between the Central and State governments in this case. Let’s have a look at how GST affects various industries.

Impact of GST on Indian Economy

Impact of GST on Traders

Impact of GST on Consumers

Key features of GST in India:

The GST will mostly minimize the cascading effect that the tax-on-tax regime has on the sale of products and services The effect will have a clear effect on the price of items. Many things have been cut in price, including movie tickets, restaurant dining, television, washing machines, stoves, and many others. GST is a technology-driven tax because all actions, such as registration, return filing, refund applications, and notification responses, must be completed through the online GST platform. This speeds up the procedure. It also has no hidden costs for authorized retailers, lowering the cost of doing business.

While the establishment of GST Registration has decreased the tax burden on many things, it has increased the pricing of others for the average person. Mobile bills, residential rent, school meals, aerated drinks, cigarettes and tobacco goods, metro travel, and many other items have become more expensive. Additionally, because all GST-related actions are conducted online, it is important to remember that India has a low literacy rate. Many people may not understand the process of the Online GST portal or how to use it, requiring assistance.

The tax duty was passed on at every level of the transaction in the old tax regime. This means that the taxes levied at each level would raise the item’s cost.  As a result, the customer’s final liability in terms of the price paid for a good or service would be greater. In the case of GST, the situation is different. There is a way to get credit for taxes paid on inputs This indicates that a person who has paid taxes can file a tax claim after submitting the tax. As a result, the sale price is decreased each time an input tax credit is claimed.

The recent introduction of E-way bills for interstate goods movement has allowed for the delayed transportation of products. Manufacturers, traders, and transporters all gain from the activity of transporting commodities from one location to another within a state. The tax authorities have profited as well, as time checkpoints and tax evasion have decreased. However, because it is an entirely new tax structure, it may confuse taxpayers, who may wind up paying the incorrect sort or amount of GST. One should not be unwilling to seek advice.

GST Explained with Help of an Example

Let’s have a look at how and where the GST tax is divided:

When a manufacturer of specific equipment or product purchases raw materials, for example, a pant maker needs a zip, cloth, buttons, and other equipment to create a pant, and these raw materials cost Rs 500. According to GST laws, this 500 rupee contains a 10% tax, which equals rupees 50.

The wholesaler will buy the item for Rs. 540 and make a profit off of it. He would expect a certain amount of rupees 30 for this. As a result, the total cost of the item has increased to Rs. 570. The tax amount will be 57 if the same 10% concept is applied.

Are you looking for New GST Registration in India?

Meralegal will assist you in receiving the required documents and registrations for GST registration in India. To contact our experts, please click on the following link.

1. GST Composition Scheme And Its Benefits 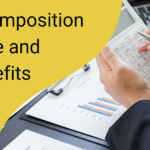 GST Composition Scheme And Its Benefits 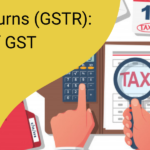